Tears welled up in the eyes of everyone on the 19th anniversary of the 9/11 attacks in the United States of America. New York City was ablaze with blue light. Two beam lights from two of the city’s most famous buildings reminded us that the United States had lost its people in that terrorist attack. The attack on the World Trade Center killed at least 3,000 people.

The beam lights were installed at the One World Trade Center and the other at the Empire State Building. Through the blue light, America was sending the message that the strength of our unity remains. The biggest terrorist attack lead by Terrorist Group al-Qaeda on the United States and the pain of losing one’s life in it has resurfaced. 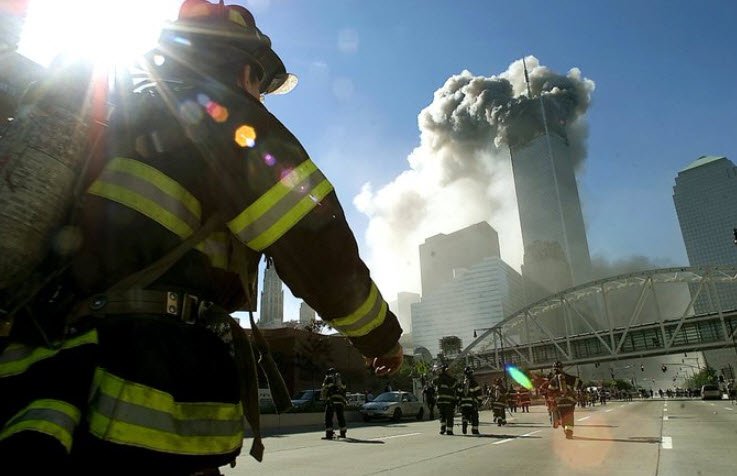 It may be recalled that on September 11, 2011, terrorists used passenger planes as missiles to target the famous US World Trade Center and the Pentagon. It is seen as the biggest terrorist attack in US history.

The dead included 343 firefighters and 60 police officers. Terrorist Osama bin Laden claimed responsibility for the attack. In 2011, bin Laden was rounded up by a US SEAL commando in Abbottabad which is the 40th largest city in Pakistan.

From 2001 to 2011, bin Laden was a major target of the United States, as the FBI even offered a $25 million bounty in their search for him.

People across the country paid tribute to those who lost their lives in the attack. Many cities, including Lower Manhattan, were lit up to show America’s determination to be energetic again. President Donald Trump and his wife observed a two-minute silence at the National Memorial while Presidential candidate Joe Biden and his governor’s wife observed a two-minute silence in New York.

Al-Qaeda’s attack on 9/11 changed everything. We will never forget those lost & the heroes who sacrificed all.

[…] the 2020 presidential election, US President Donald Trump made a big decision about H-1B visa. On Tuesday i.e. 6th Oct 2020, the Trump administration […]